My research interests lie at the intersection of evolutionary theory and ecological controls on the maintenance of small populations and the dynamics therein. I use (i) simulation-based studies to evaluate the ecological and life history components at play in small populations.
.
The aim being :
(ii) to use empirically sourced data to better understand the observed variation in nature when it is accounted for within models and
(iii) use manipulative greenhouse studies to vary these components to test model predictions and assumptions.
​
My dissertation work relates to answering the question:
What are the factors that permit polyploid plants to exist and persist in nature?
<
> 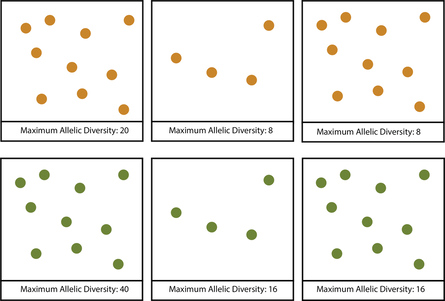 Schema of cytotypic composition and interplay of population dynamics.
Orange (diploid) and green (tetraploid).
For example, if a population of 10 diploid individuals passes through an environmentally driven population bottleneck to a size of 4 individuals, there can be at most 8 unique alleles present in the subsequent generation, at any given loci. However, if the same population was comprised of 10 tetraploid individuals to start, the same bottleneck could leave up to 16 unique alleles present in the subsequent generation. It is nontrivial to suggest too, that the tetraploid population may have a differential response to the same bottleneck, as has been outlined, there is a potential of greater allelic variation in that population to start. This hypothetical of course is a simplification and presents two populations at either extreme of cytotypic composition, but a point is demonstrated. The cytotypic composition of a population can lead to different outcomes for the population, even given the same environmental process are at work